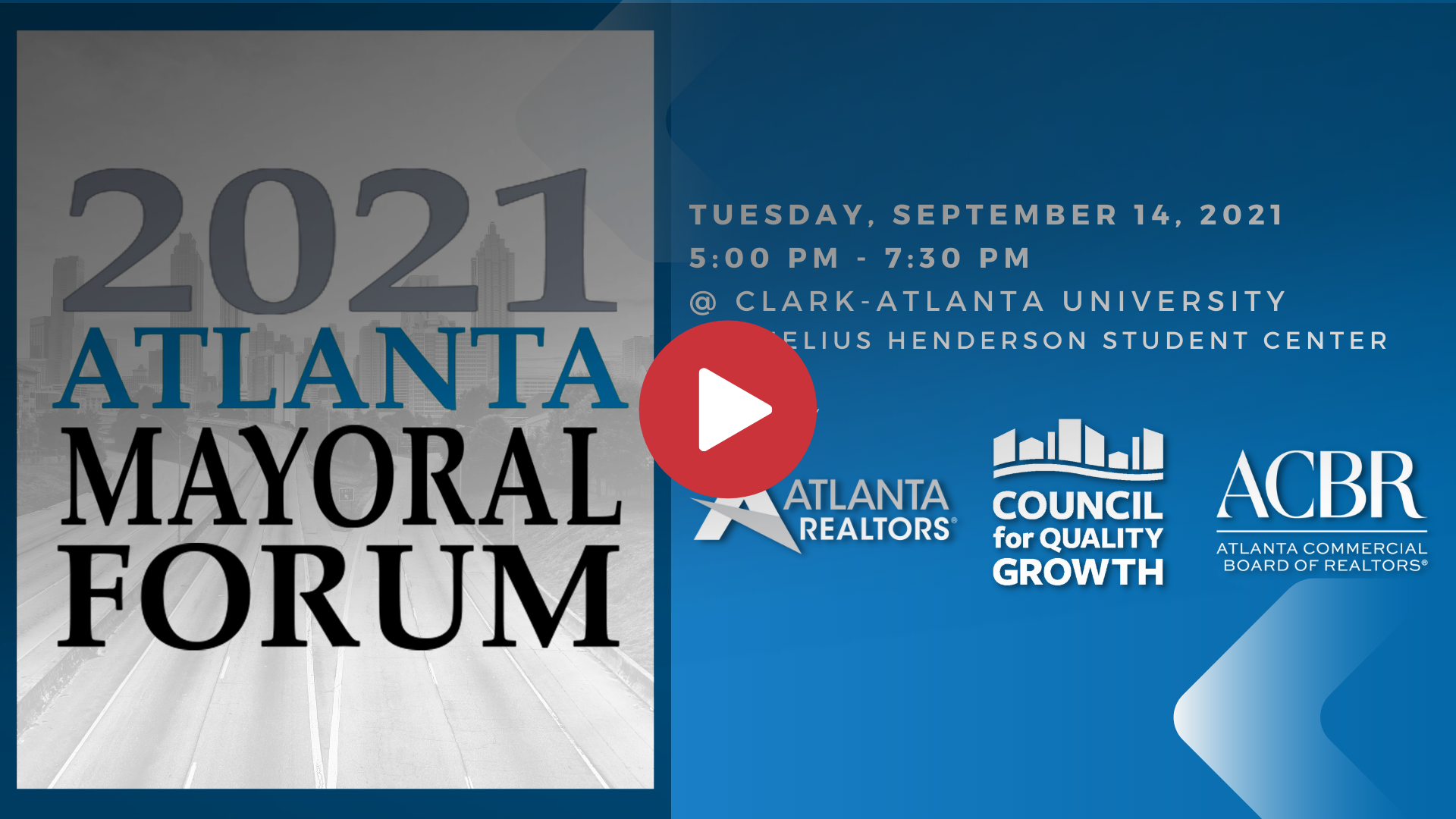 Watch the Atlanta Mayoral Forum in it's entirety here »

On September 14, 2021, the Council for Quality Growth (CQG), the Atlanta Commercial Board of REALTORS® (ACBR), and the Atlanta REALTORS® Association (ARA) hosted the 2021 Atlanta Mayoral Forum in collaboration with Clark Atlanta University (CAU). This forum was held in-person at the Bishop Cornelius Henderson Student Center at CAU with over 250 attendees in the room and another 400 online.

The 2021 Atlanta Mayoral candidates that participated in this forum were Antonio Brown, Andre Dickens, Sharon Gay, Felicia Moore, and Kasim Reed. Candidates were posed questions surrounding the real estate and development industry, including zoning reform, housing diversity, transportation expansion, the regulatory environment, job growth, workforce development, public safety, and any other issues impacting the way Atlanta grows and develops. The forum was moderated by David Rubinger, Publisher for the Atlanta Business Chronicle. Other supporting organizations included the Building Owners and Managers Association (BOMA) of Georgia, the Commercial Real Estate Women (CREW) of Atlanta, the Empire Board of Realtists®, and the National Association of Industrial and Office Parks (NAIOP) of Georgia.

Following welcoming remarks, Rubinger began the forum by allowing each candidate them introduced themselves and why they are running for mayor. With public safety being a top of mind issue voters are most concerned about, Rubinger opened on how public safety is essential for economic development and growth and asked the candidates “how is their administration would guide public safety services in the City of Atlanta to promote safe communities?” Rubinger asked a follow up question on the new proposed public safety training center Atlanta City Council recently approved with a 10-4 vote and if they believed the investment will address the realized and perceived threat of crime in Atlanta.

Brown said “more police officers on the streets won’t solve crime and that leaders need to “create a socioeconomic shift” in the “class system of Atlanta.” He was one of the four council members to vote against construction of a new public safety training center on forested land for “a number of reasons,” he said. Dickens said he voted for the center to give officers a place to learn “racial sensitivity” and de-escalation tactics. He wants to hire 250 more officers and specialists to handle people in mental health crises and homelessness. Gay said the training center will cultivate smart community policing. She also said Atlanta needs leaders who can convene with regional partners to reduce crime. Moore focused on youth engagement, stronger code enforcement, and collaboration with police to hire more officers. As council president, Moore didn’t vote for the center but voiced support for it. Reed said he’d hire 750 officers, reopen 33 community centers, and keep the city jail open to focus on up to 600 repeat offenders. He supports creating a new police center, but he’s “not yet persuaded that the location is the best location.”

The next question addressed “Buckhead City” that is being considered, which has strength and a lot of money behind it. Rubinger asked “As Mayor, the deannexation of Buckhead would have significant impact implications for the City of Atlanta, how would you seek to reconcile efforts to form Buckhead City?”

The candidates all agreed that Buckhead shouldn’t secede from Atlanta as they expressed sympathy with that community’s concerns about violent crime. Dickens and Gay both reflected on their connection to Buckhead and a disbelief in an Atlanta absent of Buckhead. Moore said she previously represented Buckhead as a councilwoman, and Brown said “political interest groups” are fueling the city’s divide. Reed said he can prevent Buckhead cityhood given how the East Lake Country Club, Emory University, and the Centers for Disease Control and Prevention “decided to annex into Atlanta” during his eight years as mayor.

Rubinger then asked the candidates a question on how housing supply, diversity, and attainability have become an increasingly critical issues in Atlanta. Do you agree recent proposals to increase density and allow ADU’s are solutions? How will you prioritize neighborhood character, housing affordability, and going housing needs? They all agreed affordable housing is necessary, but only Gay and Moore explicitly opposed major disruptions to historic neighborhoods.

Gay said she would use the “400 acres of city owned Atlanta Housing Authority property” to create more housing, but also said she wants to encourage housing diversity- both by product and price. Moore said the city needs to improve its services and infrastructure while expanding housing in partnership with the private sector. Reed said Atlanta needs to focus housing density near MARTA, which he said would involve 877 acres of city-owned land. Brown said he would prioritize community input in development within neighborhoods. Dickens promised to build or preserve 20,000 affordable housing units in eight years. Mayor Bottoms made a similar pledge to do so by 2026.

Watch the Atlanta Mayoral Forum in it's entirety here »

About the PBOR Market Brief

The Paulding Board of REALTORS® (PBOR)  Market Brief is compiled by First Multiple Listing Service (FMLS). For more information on details of this month's report, please contact the Board at 770.866.1397.

*Each month, the numbers reported for the previous month are updated to reflect additional recordings.

About the Paulding Board of REALTORS®

The Paulding Board of REALTORS® (PBOR) has been an instrumental factor in the growth of real estate in Paulding County, Georgia for more than a decade. PBOR serves as a central source of information for its members, with mainly focusing on real estate education, the promotion of professionalism in the industry and representing REALTORS® members with legislative initiatives to create positive change for the real estate community.

First Multiple Listing Service (FMLS) is the premier data services provider for real estate professionals in Georgia. FMLS was founded in 1957 by a group of Brokers who wanted to share their listings and connect buyers and sellers.  Today FMLS is the largest MLS in Georgia & the 4th largest MLS in the United States, serving nearly 54,000 real estate Agents & Brokers.  For additional information or to start a discussion about how to partner with FMLS please contact join@fmls.com.